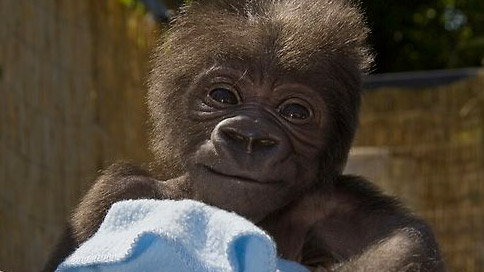 On September 3 at approximately 11:30 p.m. Azizi, an 11 ½- year-old western lowland gorilla started to show signs of entering the first stage of labor. Keepers noted that she was becoming increasingly restless and experiencing contractions. Her labor continued into the next morning and at 11:05 a.m. Azizi gave birth to a very healthy and robust baby boy. His birth weight was approximately 5 lbs! The entire troop remained together and inside the gorilla management facility at the Zoo. Azizi’s troop consists of one 19-year-old silverback male, Paul Donn, and two other females 13 year old Imani and 14-year-old Ndjia.

The infant, who remains unnamed, is doing very well. Unfortunately, after delivering her baby Azizi did not show the strong mothering skills that we had all hoped for. She was very protective of the infant but did not carry him close enough to her chest to give him the opportunity to nurse. After two days the infant had not been observed nursing nor had Azizi been in frequent close contact with him. This raised concern that his body temperature was dropping since he was unable to thermo regulate. There were also concerns of dehydration. After much discussion with veterinarians and management staff the decision was made to intervene. Since Azizi was leaving the infant for short periods of time we decided to take the opportunity to separate and handle the infant to perform a medical evaluation. This procedure was executed successfully. There was great care being taken to ensure that Azizi remained in visual contact of the infant as much as possible. The infant was given back to his mother and keepers continued to observe carefully looking for any signs of nursing bouts. As time went on with no nursing taking place the staff decided to start bottle-feeding the baby with human infant formula. He accepted this change well and continues to be bottle fed by keepers.

The current plan for this gorilla infant is to expose him to as much normal gorilla behavior as possible, limiting confusion about human relationships and behaviors. The keepers give Azizi and her troop as much opportunity as possible to interact with the infant. Ultimately, as the baby develops and becomes more independent he will become fully integrated back into his troop.